Fallen London is a lousy sandwich.

For years I resisted playing it, knowing from the barest descriptions that this game would hook me like cocaine. But last night, in a moment of weakness, I gave in, hid my wallet, and signed up.

It’s…not been the addictive marathon I was dreading.

I understand the theory1 behind the dragged-out, drip-fed mechanics: to stop players from gorging themselves sick. To show them this perfect sandwich, where the bacon is just the right side of crunchy and the lettuce is crisp and the tomatoes, oh, the tomatoes, and to allow them one scrumptious, savoury bite and then to take it away. The anticipation will make the bread softer, the mayonnaise…marginally less disgusting, and the whole experience will just be one of delicately delayed bliss.

Only I never feel like I got that that first bite. I feel like I nibbled the sandwich, got just enough of a taste to know that, yup, that’s one fine culinary experience they’ve got there, and then it’s gone before I can sink my teeth in.

It’s not that I’m not trying. I want to get hooked on this game. I want to eagerly anticipate every new scrap of information it gives me. I want to cast longing looks at my debit card before reminding myself that grocery shopping comes first. But it’s flat-out impossible to connect with a world I only see in thirty-second flashes. 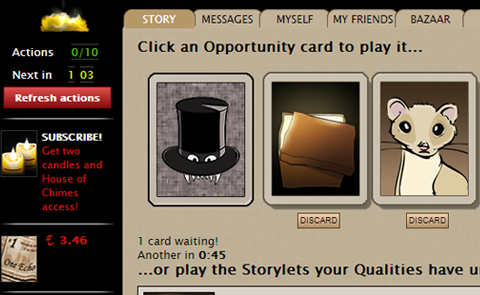 The breaks are only ten minutes, yes. But then it’s one action point before another ten minute wait and it’s not like you spent that point achieving anything, unless nudging a number infinitesimally closer to a higher number thrills you to the core. Every so often there’s a few precious sentences of new writing and you get excited. You anticipate your goal. You remember why you started this Storylet in the first place.

You spend the next ten minutes deleting old text messages off your phone. By the time you are done you have forgotten what a fuck is, let alone how to give one.

All it would take is a few tweaks. Reduce the point regeneration time. Raise the point cap a little. Make it possible to spend actual, real-world money on something useful.

Because that, in itself, may be the most frustrating thing about Fallen London. I would pay for this game. Not just the occasional bit here and there, even. Full, triple-A retail price. Thirty fucking quid. Hell, I’d pay that in a subscription fee, per year, and feel like I’d come out ahead. My only condition would be that there are no time-based action point limitations.

But the Fallen London of my dreams (which hasn’t had its pacing destroyed, which doesn’t string one minor plot out over several hours, which is actually fucking possible to get into) doesn’t exist. All that exists is the Fallen London of piddly little purchases which get you slightly less than fucking nowhere.

I can pay to start each day with double the amount of action points, which will be gone in minutes and replenish at the same sprouting-acorn speed as always. I can pay to refill my action points, earning me a whole thirty extra seconds of gameplay. I can pay for three new opportunity cards and cross my fingers that they’re not all things I can’t do.

I can, in short, pay for everything except the only thing which would make Fallen London good: enough time to give a fuck about it before it’s whisked out of my hands again. Even the most beautiful landscape is a blur through a train window. One cigarette can’t make an addict. I’m not compelled by crumbs on my lips and the lingering smell of bacon.

1 The other, less artistic theory includes the words ‘towering piles of cash’ and ‘the shameless sacrifice of good design at the alter of sweet, sweet profit’, but that is for a more cynical article. And didn’t fit into my tortured sandwich metaphor.

One thought on “Fallen London is a Lousy Sandwich”